View source
watch 01:36
We're Getting Mutants in the MCU - The Loop
Do you like this video?
Play Sound

Gaku Yashiro (八代 学 Yashiro Gaku) is the main antagonist of Boku Dake ga Inai Machi. He is Satoru Fujinuma's homeroom teacher in primary five and the real killer behind the scenes. After Satoru's attempt at stopping his actions, he decided to drown Satoru in a frozen lake, which resulted in Satoru's 15-year coma. In the 2006 timeline, he is going by the name Manabu Nishizono, which is rather an obvious identity for Japanese speakers (Manabu and Gaku share the same Kanji).

Gaku is a fair medium-skinned man with short black hair that has bangs hanging over his eyebrows, brown eyes and he is always seen wearing a suit. In his later years, his hair is slicked back and has some white streaks. He often wears a bowler hat, brown square-rimmed glasses, and black gloves to obscure his identity.

Initially, Gaku is presented as a kind, charismatic and understanding teacher who is popular with his students as he is always willing to help out. In addition, he tries to defend his students when they are wrongly accused, such as when Misato Yanagihara accused Kayo Hinazuki of stealing her lunch money. He even helps out Kenya Kobayashi, Osamu, Hiromi Sugita and Kazu with their birthday scheme by making Kayo and Satoru stay late at school so that the group could prepare surprise.

However, beneath this facade laid a deplorable, sadistic amoral psychopath who enjoyed killing. He was very methodical, ensuring two conditions were met: first, that he had someone he could frame and second, there would be a period where the person was alone. He also killed those who he saw had a spider string above their heads. His desire to kill seemed to stem from his childhood along with an experience where he drowned a group of hamsters and saw one alive while standing on one of the corpses of his fallen brethren. Gaku plans out all of his murders and ensures no evidence leads back to him while distancing himself from the incident in one town before moving to a new one. Yashiro carefully thought out his plan that he killed Hiromi Sugita, a feminine-looking boy, to make it appear as if the killer's only interest was in females by mistaking the boy for one.

Gaku was born to mild parents with a brother that was two years older than him. They placed all their expectations onto Gaku, neglecting his older brother and causing Gaku to be abused and manipulated by him. He went to Mikoto Elementary School along with his brother. During his fifth year, his brother convinced him into becoming his accomplice. He would lure girls from his school into his family's storehouse. After his brother assaulted the girls it would be Gaku's job to comfort them so they would keep quiet about it.

The news of the girl's disappearance became a popular topic in school. Children now had to walk home in a group or with a guardian to keep safe and there was a curfew in effect. Gaku was allowed to walk home with just his brother. Gaku ended up doing Fratricide by murdering his brother and making it seem like a suicide. His mother discovered his body first and the police ruled that he killed himself out of guilt.

Soon afterwards, his parents divorced and sold their house. Gaku moved into his grandfather's house along with his mother. He went onto college to become an elementary school teacher. In his third year of college, he went back to his hometown as part of a two-week teaching practice. In the town, he tried to abduct another girl, but failed when her friend showed up, which lead Gaku to make a more cautious approach in future.

Three years later, in his second year of teaching at Sapporo, he found himself engaged to a psychological counselor who was two years older. She majored in clinical psychology and child development. She was a guest lecturer at his college. She taught him about child development. But, he wasn't interested in her, but how she could help him in his path. As children began to go missing, she became suspicious and started asking him questions about what he was during on the days of murders. He ended up killing her by pushing her out the window. The police determined that she killed herself over stress.

He eventually became the home room teacher of grade 5, class 4 at Satoru Fujinuma's elementary school. There, he attempted to kidnap and kill Kayo Hinazuki, Hiromi Sugita, and Aya Nakanishi. His plans would have succeeded if not for Satoru, who used "Revival" to travel back in time to stop him, manipulating events in order to prevent their deaths. Despite Satoru succeeding, by the time Gaku reveals himself to be the killer, Satoru ended up taking the place of the three original victims on the day the killing. Fortunately, Satoru survived, but would be in coma which he would not wake from until 2003.

In 2003, Gaku was a politician and going by a new alias named Manabu Nishizono, a name that he had stolen from one of his victims. In the manga, he entices Satoru to a camp he made, using Kumi Kitamaru (Satoru's friend) as bait. Satoru reveals to him, during their confrontation, that he has seen the future and has changed it, which Gaku believes. He attempts to kill himself along with Satoru but Satoru saves him, and he is then arrested. Gaku admits to his murders and is sent to Chiba Prison.

In the anime, after meeting a disabled Satoru and taking him up to the hospital roof, Gaku seemingly triggers Satoru's memories, believing that Satoru only now remembers him as the kidnapper. However, Satoru had retrieved his memories before Gaku took him to the roof, and together with his friends, Satoru once again spoils Gaku's plan to kill a patient at the hospital. After Gaku explains his plan to kill Satoru and frame it as a suicide to him, Satoru seemingly commits suicide by going over a rooftop, and, realizing that his life is incomplete without him, Gaku proceeds to do the same, only to find Satoru had been safely caught by Satoru's allies. Gaku then laughs jovially as he sees his own spider string snap in his reflection and he is later arrested by the police. 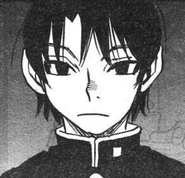 Gaku as a child

Gaku in the live action 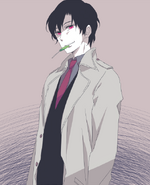 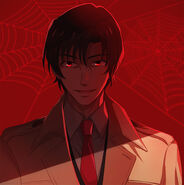