Kayo Hinazuki is one of the three original victims in a serial kidnapping and killing committed by Gaku Yashiro. The other two victims being Hiromi Sugita and Aya Nakanishi. She is one of Satoru Fujinuma's primary school classmates and is a loner due to her mysterious family life.

Kayo doesn't have much of a presence in class. Prior to becoming friends with Satoru Fujinuma's group, she didn't have any to call her own and barely spoke to anyone. She considered Satoru and herself as "fakes", as both of them distanced themselves from others, were often irritated by someone's behaviors and had trust issues. This stemmed from her abusive household, as Kayo believed that if she numbed her emotions, her mother wouldn't inflict any more pain onto her. She often dreamed of escaping her cruel life and living on an island far away from society where she could be free. She is extremely blunt and tends to call people idiots, though it's usually directed at Satoru.

Following Satoru's rerun in an attempt to save her, Kayo starts to open up to him and is initially uncomfortable of his generosity. When she stays over at Fujinuma's house, Kayo breaks down in tears at Sachiko Fujinuma's kindness, having never experienced an act of altruism. Following Satoru's coma, Kayo frequently went to visit him in the hospital and helped out his mother. The two developed a close relationship and Kayo came to think of Sachiko as her own mother. As an adult, Kayo tells Satoru she managed to obtain happiness and is shown with a smile gently holding her child.

As a loner, Kayo made herself an easy target to kidnap. In an attempt to prevent her kidnapping, Satoru Fujinuma desperately tries to befriend her when he returned to the past.

Kayo's mother abused her quite a lot throughout her life. Many injuries included suffocation, bruises and other tortures. When Kayo first met Satoru during the 18-year "Revival" she asked Satoru to kill someone for her (meaning it as a' joke'), however, she had actually wanted him to kill her mother, out of her depression from the abuse her mother gave her.

Sometime in the future, she got married to Hiromi Sugita, becoming Kayo Sugita. They had a son together named Mirai Sugita who is said to have his father's eyelashes.

After Satoru wakes up, she visits him with her son. She reflects on her discomfort of leaving him behind and is chided by Satoru in turn. 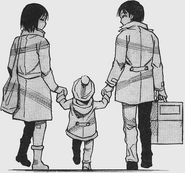