Kenya Kobayashi is Satoru Fujinuma's primary school classmate and best friend who has a strong sense of justice. He is an aspiring lawyer who has a keen eye, and noticed abnormalities due to Satoru acting much more mature than he was after "Revival". He offered a lot of help to Satoru in stopping the possible kidnapping attempts. As an adult, Kenya became a lawyer.

Kenya is a calm and level headed person, who is usually seen wearing a neutral expression on his face and is quite sharp for his age. He often prevents Satoru Fujinuma from doing reckless things, along with being one of the more observant people, noticing Satoru's strange behavior and shift in personality after traveling back in time. Although being one of the first to discover Kayo Hinazuki's poor home life, Kobayashi distanced himself from her situation, believing that a Kenya should act beforehand and being cautious of the situation. He often seen studying in his youth and striving to be number one in sports and academics, but felt empty regardless of how much praise or good results he received. Kenya tended to look down on others, often feeling a sense of superiority, though he never said or showed this through his actions. However, after becoming friends with Satoru's group, Kenya learned to loosen up and understand friendship. One of his interests in joining the group was due to their different interests and each having a different quality he never had, causing him to be more humble. Through Satoru's actions, he begins to become courageous, willing to take action rather than play it safe and ignore the kidnappings and Kayo's abuse. When Satoru wakes up after his 15 year coma, Kenya showed his kindness and offered him his support.

Kenya comes from a house with a lawyer father, a homemaker mother and younger sister. His father works hard and rarely interacts with his family, but Kenya respects him nonetheless. His mother preferred wearing plain clothes and made him home-cooked meals. At some point, he distant himself for his younger sister though he often took care of her.

Following Satoru Fujinuma's rerun, Kenya is seen with Satoru's group of friends, reading a book and he was the first one to notice Satoru's interest in Kayo Hinazuki. He was also the one who stopped their friends from teasing him about it. Since he had a keen eye, he had already noticed Kayo's bruises and quickly noticed the difference in his friend's behavior and confronted him about it. After Satoru explains things to him, he offers to help him achieve his goal. He stopped Satoru when he tried to attack Akemi Hinazuki (Kayo's mother) and suggested the hideout for Kayo after he heard of Satoru's plans.

After Satoru wakes up, Kenya visits his old friend multiple times and works with him to catch Gaku Yashiro. 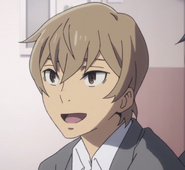 Kobayashi(Adult) as seen from the anime

Kenya (Adult) as seen from the manga.
Community content is available under CC-BY-SA unless otherwise noted.
Advertisement