Misato is shown to be a bully, with her cruelty targeted mainly towards Kayo Hinazuki. Some of her actions include:

In third grade, Misato always used to make fun of Kayo Hinazuki's pencils and Kayo threw out her prized mechanical pencil, which made Misato hold a grudge against Kayo since then. Once, she invited Kayo over to her house for a Christmas party, but only to show off her Christmas tree.

On the first day that Satoru Fujinuma goes back in time, as he sits down, she asks if he likes Kayo. During an ice skating race, Misato is seen with a group of her friends, cheering on Hamada. When she finds that he's racing Satoru, she teases Kayo that she should cheer him on.

When they were ten years old, for an unknown reason, everyone's lunch money went missing. Immediately after this was discovered, Misato suggests that someone had stolen it and pins the blame on Kayo due to her family's financial troubles. She tells everyone to check the desk of a person besides them to see if they'd taken it. As Kayo looked through her bag, she found the money. This caused the students to pin the blame on her, while Misato was seen smiling. Satoru stands up for Kayo and lashes out at the class, noting that Kayo's not a thief. Misato begins to tear up, right after Gaku Yashiro (the homeroom teacher) steps in to calm down the situation.

The final episode of the anime implies she helped raise funds for Satoru's hospitalization. 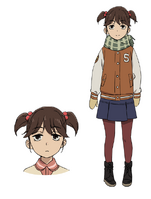 Misato all grown up
Community content is available under CC-BY-SA unless otherwise noted.
Advertisement